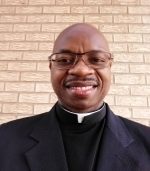 Rowland Ikechukwu Nwokocha, is the third in a family of five children and the last of the two sons of Mr. C.O.U Nwokocha of blessed memory and Mrs G.C. Nwokocha of Obodo-Ahiara, Ahiazu Mbaise in Imo State Nigeria. I was born into a family where saying the Rosary and eating dinner together as a family was part of the tradition. As a little boy, I was drawn to the life of prayer especially daily recitation. This family tradition was the seed that united all of us as a family.

After two years of serving at Mass I began to have the desire to become a Catholic priest. When I successfully completed my primary education I told my mother about my desire to become a priest. She was so happy and gave me her blessings and support.  In 1982, I was given admission to study in our diocesan seminary at the age of 12.  I had 6 years secondary education in our minor seminary and then was sent to the major seminary to study philosophy. I completed successfully with a Bachelor’s degree in Philosophy after which I was sent to teach in the minor seminary for one year. After one year of teaching, I was then sent to the Major seminary again to study Theology and I graduated successfully with a Bachelor’s Degree in Theology.  In August 2 1997, I was ordained a Catholic priest which was one of the greatest and most joyful days of my life.

From 1997-2010, I served in different capacities in my diocese as associate pastor 1997-1999; pastor 1999 -2003, Principal of a Secondary School, 2000-2003, pastor 2003 -2010. Having worked in my diocese for 13th years, my local ordinary gave me a study leave to come to the United States. I got an admission to study Bioethics at Loyola Mary Mount University California. I did Master’s program in bioethics and graduated in May, 2013.  I did also a program on Clinical pastoral education at Long beach memorial hospital and Hoag hospital in Orange County California.

The Catholic diocese of Salt Lake City hired me in 2013 to work in the following hospitals as a priest chaplain: University of Utah health Care, Huntsman Cancer Institute, Intermountain Primary Children’s and Shriners.  As a Catholic priest working in the hospital, I have enjoyed getting to know patients and families and listening to their stories. I have realized that family is very important because when one is sick, the family is sick. I have also realized that turning to God in times of sickness is very important because there could be possibility of human error in patient care. I have come to enjoy Utah since my arrival in 2013. Utah has many beautiful national parks and as an outdoor person I feel very much at home.